CHECK IF YOU ARE ELIGIBLE NOW
Click the button to fill out our online form.

Hi all, this is my first ever blog so lets see how it goes!

My name is Yiannis. I am a 21 year old powerlifter in the BDFPA (British Drug Free Powerlifting Association) and the WDFPF ( World Drug Free Powerlifting Federation)! I am currently British champion in the junior under90kg squat and bench press and I have a silver medal for the European squat and a bronze for the European bench! I am currently going up a weight class to the under 100kg junior class! Next year I have the British championship in March and the world championship in June in Germany!

I remember watching the world strongest man as a kid with mum at Christmas time and said I would one day be big and strong and at the age of 21 I am writing a blog on strength so I feel like I have fulfilled something I said I would! 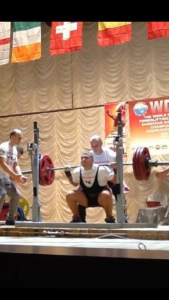 I started weight training in august 2011 when I weighed 67kg and started on a basic gym routine, 5 day split working each body part once a week! After a month or so I noticed my strength flying up and size came with that! I started getting in bodybuilding and bought flex and mussel and fitness magazines and learnt about supplementation and the different forms of training and training methods! I then bought a book that I would advise to anyone who lifts weights weather it be for strength or bodybuilding or for fun and that is Arnold Schwarzenegger’s guide to modern bodybuilding! My knowledge was increasing as was my strength! After a few months a bench press world champion who trains where I train and work, asked me if I wanted to start and at first I wasn’t so keen but I thought about and I decided what harm it would do me! So I joined the BDFPA sent my entry from off for the comp, bought my leotard and I was ready!

My first competition was the North West British qualifier held in Lancaster! In the squat I equalled a British record, the bench press got a pb and same with the deadlift and I really enjoyed the experience and couldn’t wait to lift again! My next comp was a north east divisional where I did better then I expected! I was the only qualifier for the British single lift champions where I went with a back injury so underperformed but still claimed my two titles British bench champion and British Squat champion!

On winning the British I qualified for the European championships which were held in Cherkassy Ukraine! My training for that was hard and strict and same with my diet! When we arrived in the Ukraine there was a bit of a disaster as my bags hadn’t been put on the plane so I was without kit and I was lifting the next day! 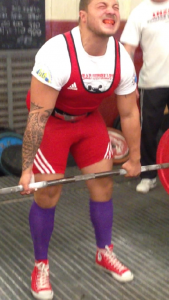 It looked like I would be missing out until we managed to borrow some kit and I got a massive pb  with a squat of 185kg, coming second and the winner winning with 187.5 so it was a close battle! Luckily my bag arrived that evening so I would have the comfort of my own kit! I wasn’t expecting to win the bench but I wanted a pb, my previous comp pb was 117.5kg and I managed a 125kg which I was extremely happy with! In Ukraine we were at gym training and I tore my calf which has affected my training coming up to my next comp on the 8th of December! I have not been able to prepare for this one like I would have liked but now my calf has fully healed I would like to get some more pbs! My last comp was the British qualifier in Lancaster where I was full of confidence after my lifting in the Ukraine and I set a British record in the squat only to have it later taken away because the scales were not collaborated properly which means I might not of weighed what the scales said I did (even tho they were 100% right) but these things happen! So next year is a big one with the British, Worlds and European championships!

Right onto my training now! I am a big hypertrophy fan so I like my bodybuilding routines and exercises which a lot of strength athletes stay away from but not all! My split is a 5 day split and I always include my power at the start which includes Bench, Squat, Deadlift and Push pressing and my hypertrophy and assistance after my powerlift! As I get 6-8 weeks out I start my comp prep so on weeks 8 down to 6 I will do 5×5’s on my power exercise and my assistance work stays in with quite a few exercises and high rep range! Then from weeks 6 down to 4 I will do 3×5’s on my power and my assistance work rep range lowers and weight comes up and the exercises lower so I will only do 3 assistance exercises to assist the power movement! 3 weeks out I will do 2×3 and 1×2 on my power assistance will stay the same as the previous weeks!

2 weeks out I will do 2×2 1×1 on power assistance stay’s the same and the week before the comp I will do my 1rm (one rep max) testing to work out where I stand for my comp and will then have a light week till the comp! In training in my eyes I like to train with someone who can push me but I also like training on my own so I can get on with it! I have had training partners in the past who like to talk (a lot) and I wasn’t able to get intense sessions in! You need to push yourself when training as well no point half arseing it in the gym because at the end of the day my motto is “go hard or go home” I wouldn’t be were I am without training hard and dedicating myself to this life! In training for the European I had one cheat meal a week and cut out alcohol for 12 weeks only drinking twice in that period! This isn’t a hobby for me it is a LIFESTLYE! I eat, sleep, drink and live it!

I have to thank Andrew Rigby for getting me involved in the sport and supporting and coaching me through it all! I would be where I am now without him! Also I would like to thank my team of sponsors St Anne’s YMCA where I work and train who have helped me with time off for comps and helped me with my kit! KS sports & massages therapy who have kept me loose and has helped my calf get back to 100%! Woodhouse opticians who funded my trip and gave me their full support! Cool Beans Coffee for ongoing publicity and support, finally the Protein Lab who are the latest company on my team who supply me with the supplements to fuel me!

I am going to be blogging every 6 weeks or so but if you want to follow my journey fell free to follow me on twitter @yann_verenakis and if you have any questions ask me on there and I would be more then happy to follow you back and answer any questions you may have whether it be about help with your training or just about my competing!

Cool Beans are committed to helping you make the most of your business by offering the highest quality drinks solution at the best possible price.